A rich natural soundscape from an
undisturbed tropical rainforest in Borneo. This album is part of the ‘Heart of Borneo’ series of nature sound recordings which will published in the future. Each album will showcase a different soundscape from Borneo’s unique tropical rainforests.

In 2019 I spent several days recording in the spectacular lowland and hill rainforests of Tawau Hills Park on the east coast of Sabah, Borneo. While now cut off from the remaining intact forests of Borneo’s interior, Tawau Hills is a significant, healthy 300km2 block of undisturbed forest. With both lowland and mid-altitude hill forests this reserve boasts an incredible diversity of plants and animals.

The tracks on this album were all recorded deep in the reserve in the area around Mount Lucia lodge where there was a nice mix of species found in the lowlands and some which were more common at mid-altitudes. Notes on each of the tracks can be found in the ‘Track Listing’ below.

A big thanks to Shavez Cheema from 1StopBorneo Wildlife for helping organize the trip and sharing his knowledge of the forest! 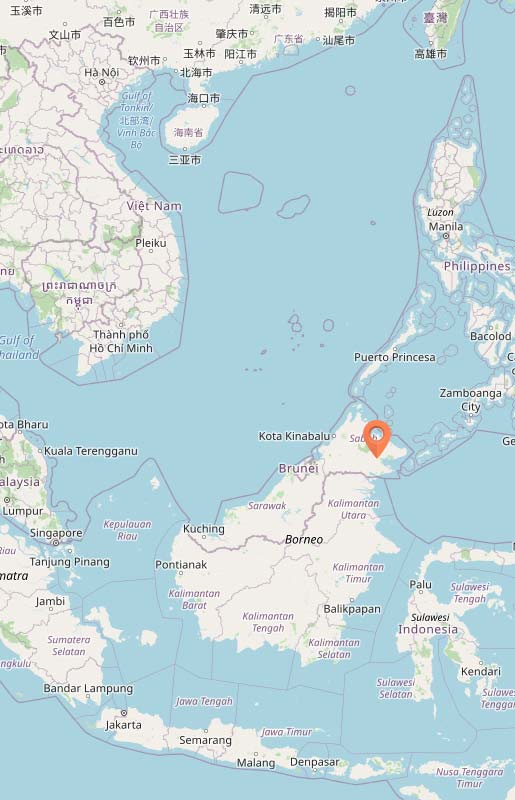 Before sunrise, Bornean Gibbons begin to sing in the distance while the last of the nocturnal forest sounds gently fade. As the dawn chorus begins, Cinereous Bulbuls, Green Broadbills and a White-rumped Shama call, and a second gibbon begins calling in the foreground.

The cicada intensity increases and a storm begins to roll in over the hills. The air is heavy as thunder grumbles above and Common Emerald Doves coo rhythmically from the forest understory. At 0:34 a Rhinoceros Hornbill flies overhead and throughout the track Great Argus pheasants make their loud ‘kow-wow’ calls. The explosive barks of a muntjac deer can be heard and at 1:32 & 1:53.

Rain starts falling in the forest, but it is not torrential and the birdsong continues lightly in the background. As the rain eases from 6:40, the bird activity increases as many species move through the mid-storey in a ‘bird-wave’.

In this track the wild, unique call of the Helmeted Hornbill can be heard – a series of accelerating whoops building to a crescendo of maniacal laughter! Along with the hornbill call is a distinctive sound of the afternoon in Borneo’s forest – the grinding, mechanical rhythms of the cicada species Dundubia vaginata. Yellow-crowned Barbets call repeatedly in the second half of this track.

The iconic sound of dusk in Borneo’s rainforest – Empress Cicadas make their loud pulsing calls along with a number of other cicada species. The last of the diurnal birds sing softly from the canopy and Bornean Treehole Frogs begin making their ‘toop’ notes as the light fades.

This final track is one of my favourite soundscapes from my time in Tawau’s forests. After dark, tiny Bornean Treehole Frogs (Metaphrynella sundana) make the melodic notes, the variety of pitches coming from different individual male frogs calling from small crevices in the trunks of trees. Each male tunes his call to the pitch which resonates best in his individual chamber, so that the call is naturally amplified and gives him a better chance of attracting a female! In the second part of this track another fluty call can be heard along with the treehole frogs – I’m not sure which species this is and whether it is even a frog.

Photos from the Recording Location…