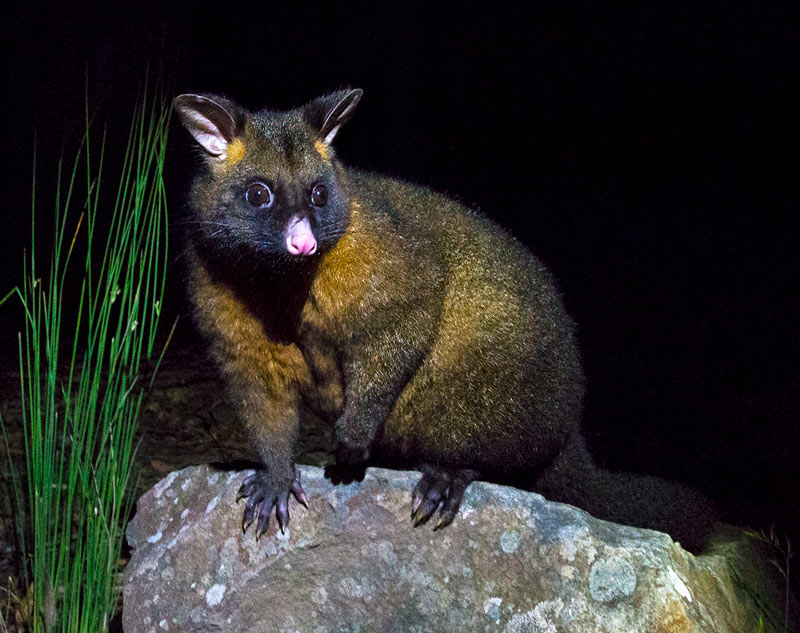 Common Brushtail Possum (Trichosurus vulpecula) – This is the rufous form common in Tasmania.

Another of the more disconcerting sounds of the Australian bush at night, the throaty coughs and growls of a Common Brushtail Possum (Trichosurus vulpecula) sounds more monster than fluffy marsupial!

This species is widespread throughout Australia and is even common in some urban areas. The sounds of this species is one of the many scary sounds in the Australian bush at night and often freaks people out when they hear it for the first time! Apart from these growling calls, Common Brushtail Possums make other sounds including loud shrieks and harsh rasping calls.

The audio in the following video was recorded at Dunn’s Swamp in Wollemi National Park, NSW and captures a couple of possums having a territorial disagreement! In the background you can here the calls of White-throated Nightjar, Southern Boobook and Eastern Banjo Frogs.


SD584B2 This sample features the typical coughing growls of a Common Brushtail Possum. These calls appear to be territorial. Recorded in Benarkin State Forest, Queensland.

D1B These wheezy screeching calls are often given in dispute when two possums are close to one another. Recorded in Dharug National Park, New South Wales.

Y1B I think these shrieking screams are another agitation call. Recorded in Yerranderie, New South Wales.