A Morning in the Daintree Rainforest The Daintree Rainforest in Far North Queensland is one of Australia’s largest intact lowland tropical rainforests. A haven of biodiversity, the Daintree region is home to iconic species such as the Southern Cassowary, Bennett’s Tree Kangaroo and Saltwater Crocodile. Although these larger species often remain hidden, the abundance of birdlife in the Daintree is obvious with around 430 species documented in the area.

This album was recorded in a forest gully early in the morning and captures some of the unique sounds of the Daintree Rainforest. Starting at first light, the first ten minutes of the album capture the vibrant dawn chorus with many species singing and heralding the new day. The recording then drifts into a more subdued ambience as the morning brightens. The whoops of Superb Fruit Doves can be heard from the canopy overhead, and Little Shrike-thrush sing occasionally from the understorey with their strident melodic phrases. Later in the recording, a morning breeze ebbs and flows through the forest and Wompoo Fruit-doves make their distinctive ‘wom-poo’ calls as they feed on a fruiting strangler fig. The album begins in the predawn light with the sounds of Black Butcherbird, Grey Whistler, Little Shrikethrush, Dusky Myzomela, Yellow-spotted Honeyeater and Hornbill Friarbird leading the dawn chorus. At around 1:00 the high-pitched squeaks of an Eastern Tube-nosed Bat (Nyctimene robinsoni) can be heard.

From around 10:00 the ambience begins to settle with sparser birdsong. The sounds of Superb Fruit-dove whooping from the canopy overhead, the cooing of Pacific Emerald Dove from the forest understorey and the sharp melodic songs of Little Shrikethush can be heard for much of the morning. At 42:08 the first Torresian Imperial Pigeon can be heard with its deep, hoarse cooing calls. Orange-footed Scrubfowls occasionally make their wild, crowing calls in the background and from around 28:00 – 33:00 a pair are scratching and foraging in the leaf litter.

Later in the track, from around 51:00 a variety of pigeon species can be heard calling and moving about from the crown of a strangler fig where they feed on the abundant fruit. From 1:02:27 onwards Wompoo Fruit-doves can be heard with their distinctive ‘wom-poo’ calls and croaky gargles. In this final section of the track cicadas begin to call and a morning breeze ebbs and flows through the forest.

In addition to the audio sample above, you can listen to a 30 minute excerpt from this album on the Wild Ambience Youtube channel, as well as plenty of interesting examples of bird and wildlife sounds from Australia and around the world. Subscribe to the channel to stay in the loop! 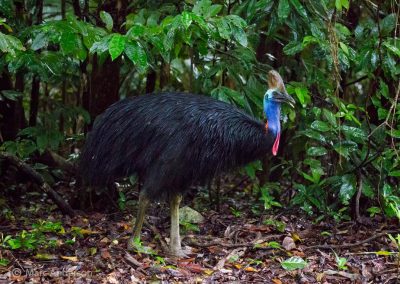 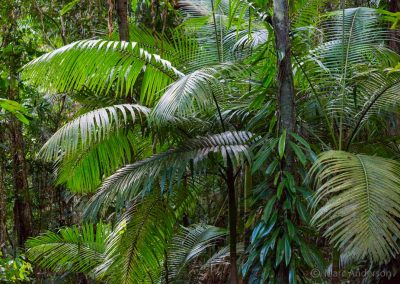 Palms in the Daintree