A vibrant soundscape recorded on the edge of a
melaleuca swamp in far northern Australia. Cape York Peninsula has some of the most extensive melaleuca swamp forests remaining in Australia. Melaleuca trees (pronounced ‘mel-la-loo-ka’), also known as paperbarks, thrive on floodplains and wetlands in northern Australia. They provide nesting sites for many bird species and their flowers are important food sources for nectivorous birds such as honeyeaters and lorikeets.

This album was recorded by the edge of a melaleuca swamp, adjacent to dry tropical woodland and with an open lilypad-covered lagoon in the background. Locations like this where multiple habitats overlap are especially rich in biodiversity. The recording captures the early morning sounds of both wetland and woodland species calling and moving about in this unique landscape. Listen with headphones to immerse yourself in the dynamics of this recording – the movement of birds as they fly from one place to another in stereo is particularly engaging!

The tracks on this album were extracted from one long recording made between 5am and 9am. The notes below describe some of the sounds you can hear on each track. The recording begins about 30 minutes after sunrise, once the dawn chorus had quietened down a little. A family of Sarus Cranes, one of the loudest bird species in the world, can be heard calling occasionally throughout the album with wild, bugling notes. White-necked Herons, Great Egrets & Australian Pelicans make deep growling scolds as they squabble for feeding territory in the shallow waters of the wetland. Out on the lilypads, Comb-crested Jacanas are equally territorial, chasing one another across the floating vegetation, making high-pitched piping notes. In the far distance, a Palm Cockatoo can periodically be heard with it’s unusual squeaky whistles.

The first half of this second track is rich with birdsong. At 1:42 a pair of Blue-winged Kookaburras raucously squawk and cackle from the open woodland behind the microphones. Graceful, White-throated and Rufous-banded Honeyeaters call occasionally as they feed on flowering blossom in the melaleuca trees along with Little Friarbirds and Blue-faced Honeyeaters. The second half of this track is a little more subdued, with some of the sounds now drifting more into the background.

As the day warms, Peaceful & Bar-shouldered Doves become more active, cooing rhythmic phrases from the dry woodland. The liquid, fluty notes of the Green Oriole are a ubiquitous sound of the tropical far north, and add a constant feature to the morning soundscape. From about 18:00-26:20, dozens of doves flit above, wings whooshing and clapping as they pass right by the microphones.

The final track on the album was recorded around 9am, as a light breeze starts to blow through the landscape, native bees buzz in the flowering trees above and the birdsong softens. 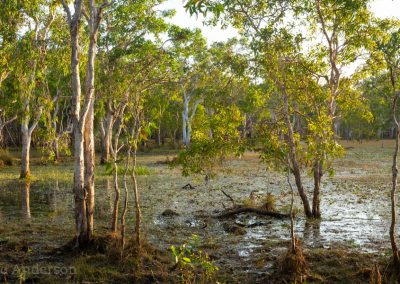 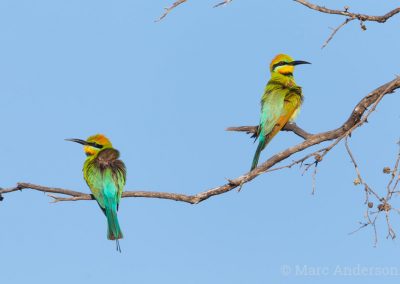