On The Riverbank:
Chitwan

A relaxing nature soundscape recorded by a river in Nepal’s Chitwan National Park. Recorded on the banks of the Rapti River in Chitwan National Park, Nepal, this relaxing soundscape features the sounds of Black-hooded Oriole, Red Junglefowl, Striped Tit-Babbler, Magpie Robins, Chestnut-headed Thrush, Greater Coucal, kingfishers and many other bird species, as well as the delicate sounds of dragonflies and crickets from the grasses on the river’s edge.

Usually I go to great lengths to get away from the sounds of human activity on my recordings. In this particular case, I had placed my microphones in a fairly isolated bend in the Rapti River and left them for an hour or so to capture the sounds of the nearby riverine forest. It was only later on, when listening to the recording through headphones, that I discovered the gentle sounds of two wooden canoes passing along the river. I decided to include this part of the recording in the album, as I find the rhythmic sound of the boatmen paddling complements the natural ambience and captures a harmonious example of the local Tharu people living traditionally alongside nature. I positioned the microphones on a tripod right by the rivers edge. Being a deeper section of the river, the sounds of the water flowing are very subtle. Orange-headed Thrush sings from a tree by the river and the rolling calls of Spotted Dove are a constant feature. White-throated & Common Kingfishers call occasionally, along with Black-hooded Oriole & the trumpet-like crows of Indian Peafowl. At around 12:00 the sounds of the boatmen paddling down the river begin. 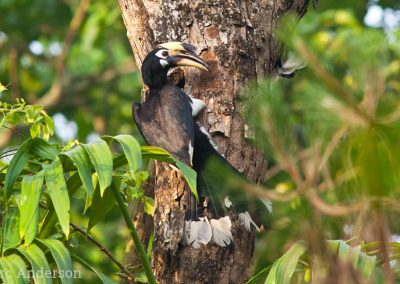