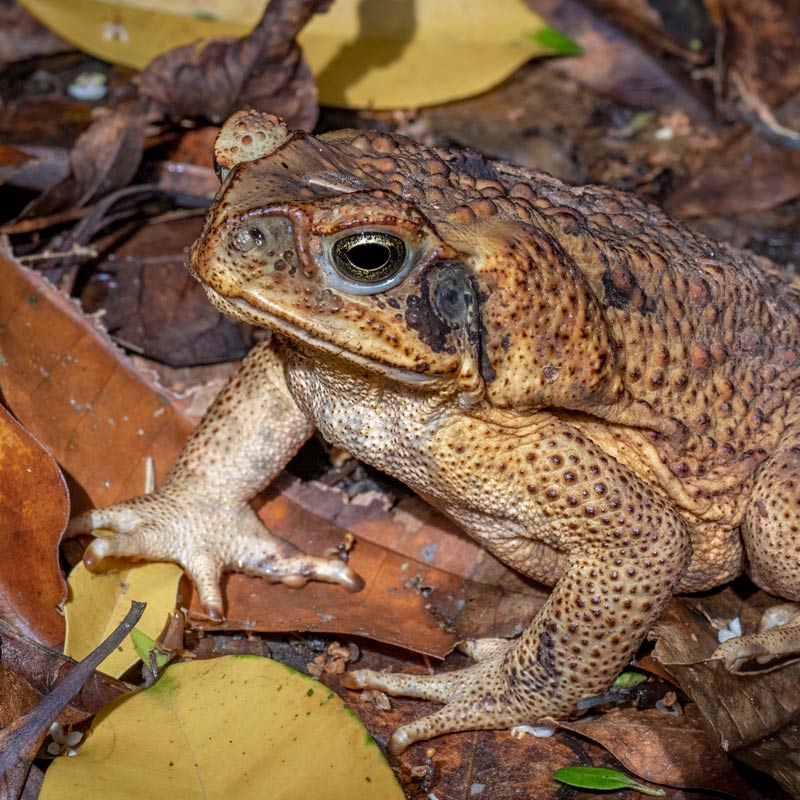 The Cane Toad (Rhinella marina), [also known as Bufo marinus] is the world’s largest species of toad. Cane Toads are native to South and Central America, but have also been introduced to Australia and a number of islands in the Pacific & Caribbean where they have become pests and are causing significant ecological damage.

Due to their toxicity at all stages of life, from tadpoles to adults, Cane Toads can poison other animals which eat them. Many predators in areas where Cane Toads have been introduced die after attacking or ingesting a Cane Toad. In contrast, where the Cane Toad is natively found in Central and South America, there are natural predators which are able to eat this species and remain unharmed, and in turn, keep its population in balance. Species such as the Broad-snouted Caiman (Caiman latirostris), Banded Cat-eyed snake (Leptodeira annulata), various species of eel and fish, some species of ibis and bullet ants are known to prey on Cane Toads.

The most-commonly-heard sound made by the Cane Toad are deep, rolling calls. These sounds are far-carrying and can often be heard from a significant distance.

The audio in the video below features the typical deep, rolling croaks of a Cane Toad. Recorded in Ravenshoe, Queensland, Australia.
z


S7LOM228 Recorded at the start of the wet season in Far North Queensland, several Cane Toads call from the edge of a small creek just after dusk. Location: Near Mount Garnet, Queensland, Australia.