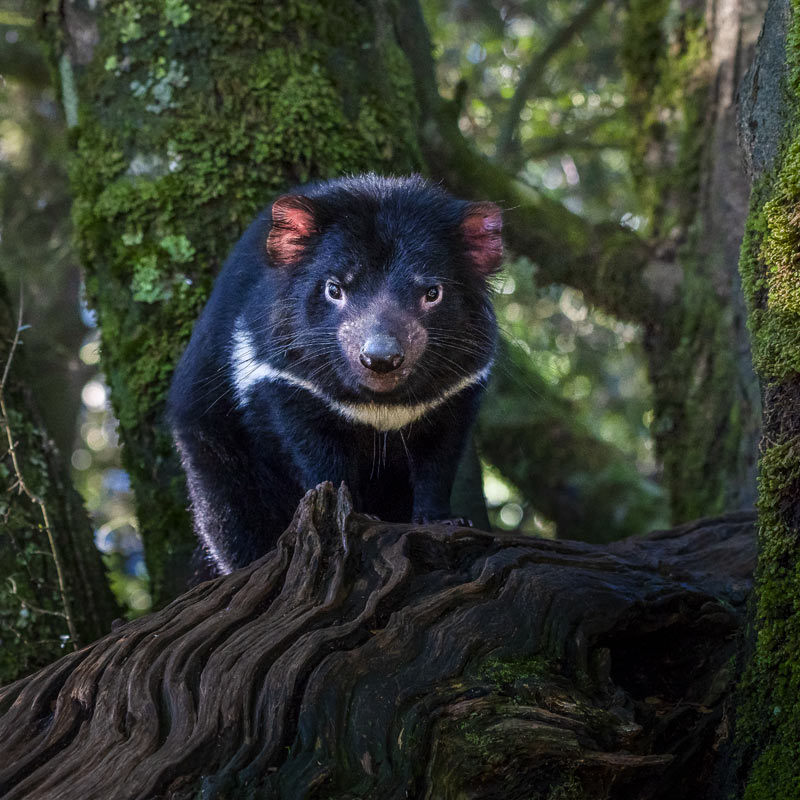 The Tasmanian Devil (Sarcophilus harrisii) is the largest carnivorous marsupial in the world and for its size has one of the most powerful bites of any mammal. It is now only found in Tasmania, although a few thousand years ago it also inhabited parts of mainland Australia.

Tasmanian Devils make a range of sounds including raspy screams, shrieks, growls, snorts and grunting calls. These sounds are often heard when devils are feeding at night. They are generally territorial, solitary creatures and guard their food aggressively. Occasionally, when a larger animal carcass is found, several Tasmanian Devils may tolerate each other’s presence while feeding, although it is usually a noisy affair with much growling, snarling, teeth baring, lunging and aggressive posturing!

It is thought that the devil’s name was earned after early settlers heard these disconcerting, otherworldly noises coming from the Tasmanian wilderness at night.

The Tasmanian Devil is classified as endangered and has been severely impacted by a transmissible cancer called Devil Facial Tumour Disease (DFTD). In some parts of Tasmania, devil populations has decreased by as much as 80%.

The video below features the typical sounds and call made by Tasmanian Devils while feeding and squabbling over food. In the second half of the video you can hear the sound of their powerful jaws cracking bones! Recorded in the wild in Loongana, Tasmania.
Positioning my rig completely off the ground was essential for this recording – to say these guys can chew is an understatement! Thankfully they don’t climb trees well so I strapped the bag and mics out of reach in a small tree close by where the action was likely to be and left the rig out overnight.
Back to main 'Wildlife Sounds ' page...