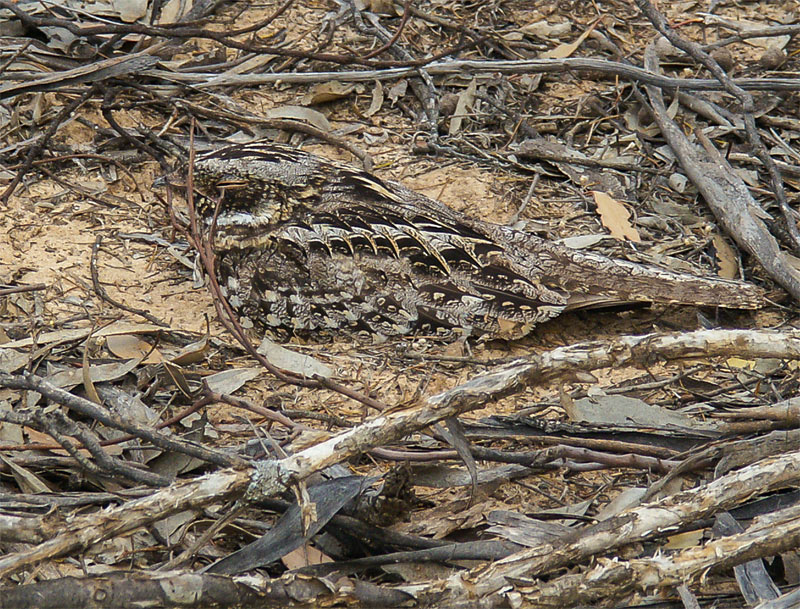 Spotted Nightjar (Eurostopodus argus)
Photo credit: Iain Stych / iStock
The song of the Spotted Nightjar is a rising series of notes ending in a bubbly chuckle. The first note of the phrase is drawn out, followed by a series of repeated notes rising in pitch and then the final notes are a rapid cluster of bubbly disyllabic sounds. Spotted Nightjars make a number of other sounds including hissing sounds when threatened and deep churring alarm calls.

The Spotted Nightjar (Eurostopodus argus) is found mostly in the drier regions of the Australia, inhabiting open woodland, grassland, mallee and arid shrubland throughout much of the continent. This species is mostly absent east of the Great Dividing Range along the coasts of eastern Australia.

A nocturnal species, Spotted Nightjars usually spend the day roosting on the ground, superbly camouflaged amongst leaf litter and dry undergrowth. They can often be seen and heard just after dusk.

The audio in the video below features the typical bubbly song of the Spotted Nightjar along with low pulsing calls likely made by a Little Buttonquail. Recorded in Sturt National Park in outback New South Wales, Australia.