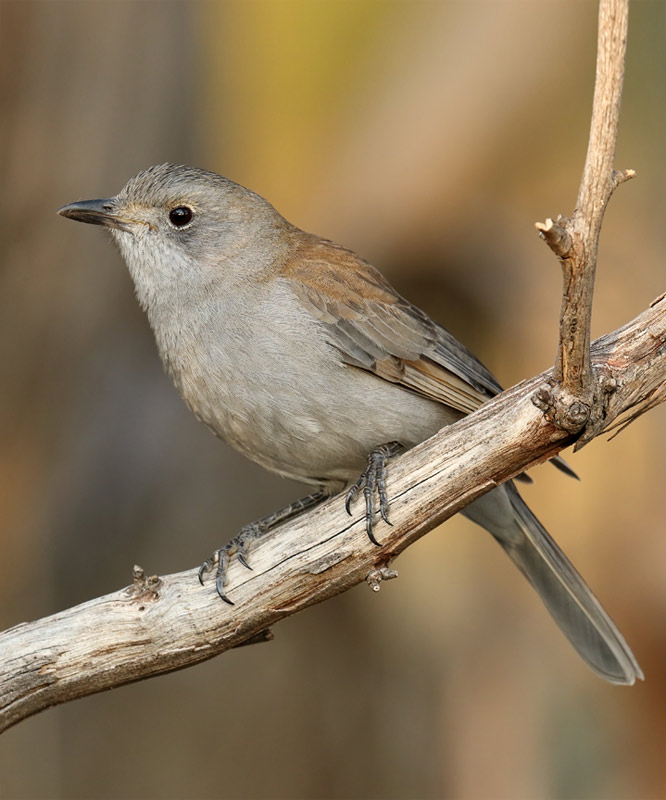 The Grey Shrikethrush (Colluricincla harmonica) [or Grey Shrike-thrush] is a common Australian songbird found throughout mainland Australia and Tasmania. It is also found in coastal New Guinea.

This species has a rich, melodious song and is especially vocal during the spring and summer months. The song is often described as mellow, liquid, fluty and harmonic. A typical song phrase consists of 4-8 notes and often begins with 2-4 repetitive notes. Most song phrases contain a distinctly louder, more strident note at the end. These song phrases can vary regionally, and even individual birds can have their own unique melodies. Male Grey Shrikethrushes are reported to average about 16 song phrases in their repertoire, and females slightly less at 11. The bird in the recording in the video below is a good example of how varied the song of this species can be!

Apart from the song, Grey Shrikethrush also give single & double-note calls as well as sharp, repetitive phrases. These simpler calls are often heard during the winter months.

The audio in the video below features a nice variety of song phrases from a Grey Shrike-thrush. Weebill, Chestnut-rumped Thornbill, Grey Butcherbird, Brown Treecreeper and a number of other species can be heard in the background. Recorded at Gluepot Reserve, South Australia.

XC336305 This is a variation of the typical song. Recorded in Nombinnie Nature Reserve, New South Wales.

XC334663 Another song variation, this one was recorded in the Flinders Ranges, South Australia. Rufous Songlark, Willie Wagtail, White-plumed Honeyeater, Tree Martin and Peaceful Dove call in the background.

XC204460 This song was recorded in the Bay of Fires region, Tasmania.

XC233846 Another call type often heard in winter, this is a resonant, repetitive series of notes. Recorded in the Warrumbungles, New South Wales.

XC287029 This is another call type. I haven’t heard this particular call in the coastal forests of the south-east around Sydney, but it was quite common in the arid woodlands of south-west Queensland. Recorded at Bowra Station, QLD.