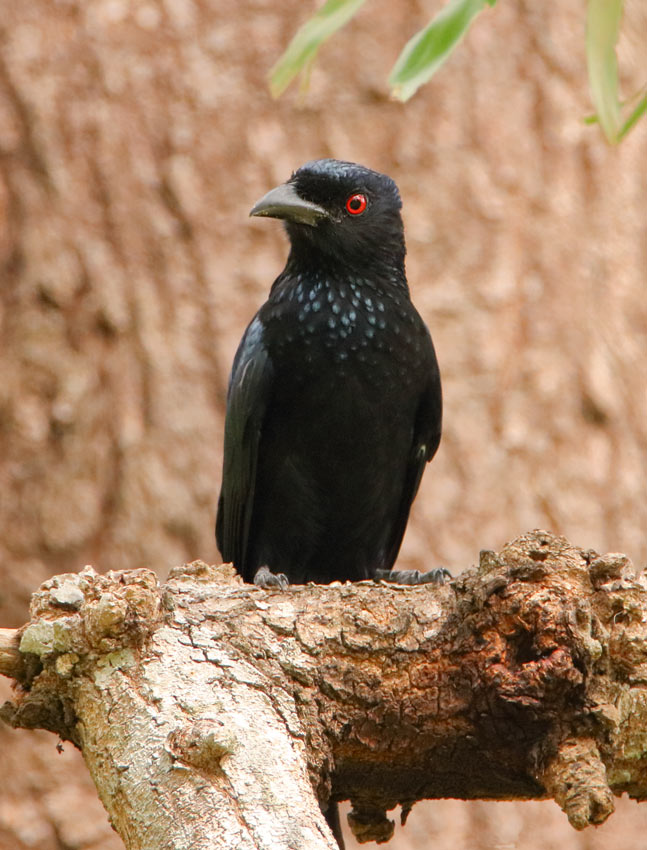 As you can hear from the audio recordings at the bottom of this page, songs & calls vary much throughout their range. A notable feature of the mimicry of this species is its tendency to mimic the calls of a local common species of Accipiter. For example in south-east Australia Spangled Drongos frequently mimic Brown Goshawk (Accipiter fasciatus). In the Wet Tropics of Australia they can more often be heard mimicking the calls of Grey Goshawk (Accipiter novaehollandiae). And in West Papua I have heard them on a number of occasions mimicking Variable Goshawk (Accipiter hiogaster). I’m not sure if any studies have been done resreaching this phenomena in Australasia, but it would be interesting to learn how mimicking the calls of predatory species is benefiting the birds in this region. In Africa, studies have found a similar species, the Fork-tailed Drongo (Dicrurus adsimilis) mimics the alarm calls of other species to scare competitors away from a food source.

The Spangled Drongo (Dicrurus bracteatus) is a medium-sized, glossy black bird found in Australia, New Guinea, the Solomon Islands, the Philippines & parts of Indonesia. Spangled Drongos inhabit rainforests, woodlands, mangroves, parks & gardens. This species is generally more common in subtropical and tropical regions although in summer it can be found as far south as Victoria (there is even a vagrant Spangled Drongo record from Tasmania!).

The audio in the video below features the mechanical song & chattering of Spangled Drongos along with a number of other species.. Recorded in Nightcap National Park, New South Wales, Australia.

XC531708 A variety of calls from a small group of Spangled Drongo on Batanta, West Papua.
z

XC531707 Melodic song phrases from a Spangled Drongo on Batanta, West Papua. The soft calls in the foreground of this cut are made by Rusty Pitohui (Pseudorectes ferrugineus).
z

XC502871 These are one of the most commonly heard call types of this species in the Bird’s Head Peninsula region and western islands off New Guinea. Recorded in the Klasow Valley, West Papua.
z

XC533541 These were one of the most commonly heard call types I recorded of this species in the Weda region of Halmahera (North Maluku), Indonesia.