The noisy territorial call of the Laughing Kookaburra is one of the best known sounds of the Australian bush. A mix of cackling ‘laughter’, chuckles and hoots, this famous call is most often heard at dawn and dusk. Often given in chorus as a pair or family group, the call is often given in response to neighbouring group, evidently to establish territory boundaries. Laughing Kookaburras make a number of other vocalisations relating to courtship, feeding, contact, and danger.

One of Australia’s most iconic birds, the Laughing Kookaburra (Dacelo novaeguineae) is the world’s heaviest species of kingfisher (the Giant Kingfisher [Megaceryle maxima] of Africa is a touch bigger in average length). Native to eastern Australia, it has also been introduced to to south-west Australia, Kangaroo Island, Flinders Island, Tasmania and the north island of New Zealand.

Laughing Kookaburras are an adaptable species and can be found in a variety of habitats including open forests, woodlands, farmlands and even in urban parks and gardens. They are a familiar sight in campgrounds, parks and picnic areas along the east coast of Australia, and it’s not uncommon to have them swoop down and steal sausages right off the barbeque grill!

The audio in the following video is an example of the typical early morning territorial song given by a pair of Laughing Kookaburras. Recorded in Wollemi National Park, New South Wales.

XC353413 This next recording is a chorus of several birds giving the typical ‘laughing’ calls at dawn. Recorded in Tully Falls National Park, Queensland.

XC353414 In this third recording you can hear interaction sounds between two birds. Recorded in Tully Falls National Park, Queensland. 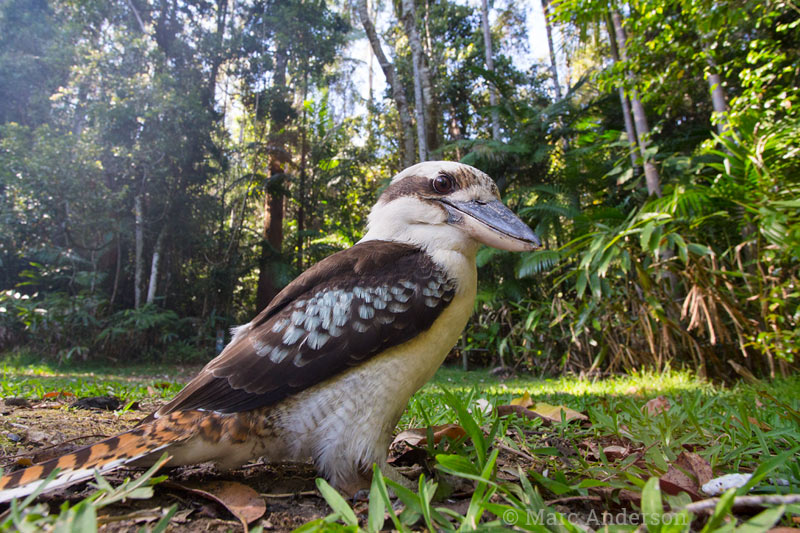 Laughing Kookaburra at a campsite in NSW. This species feeds mostly on prey taken on the ground.